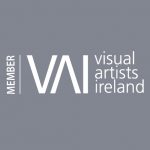 Thanks for stopping by!

Last summer I was back in Mayo [ we lived there for 10 years, but had unfortunatley to move back to the Uk for personal reasons]  While there I came across an old ruined cottage at the base of Croaghmoyle  mountain in Glenn Nephin.  The configuration  of this ‘humble wee Cottage’, matched ‘White O Morn’, exactly. I had a few visits with the old couple next door [ not to mention tea, cakes and sandwiches!!] who told me the history of the cottage.

It had been inhabited up until the 1970’s when the thatch had come down and the old Lady said she was constantly in and out of the cottage as a liitle girl.  They showed me the pictures of the couple who lived there from one of their many albums full of mass cards showing the faces of the departed folk from the area.

The land around the cottage was up for sale as a site, so I went to have a look at the planning. Could you believe it, the humble wee cottage was standing exactly where the sceptic tank was to go and the plan read ‘ ruined cottage to be pulled down and the stone used for walls!!!

I revisited the old couple who lived next door to the site and had another chat with them. Understandably they were nervous about who their new next door neighbour might be and what he might build next to them. I shared with them that if I could purchse the site I would let the planning expire and  I would rescue the old cottage and restore it to it’s original condition as a testimony to the ones who built it and to the families that lived in it.

White O Morn Cottage represents Old Ireland, it represents all the old Cottages, it represents the family, which was and still is the living Heritage of ireland. It’s a tragedy that most of these wonderful old Cottages are being destroyed, they should be honoured and cared for so that future generations can look at the in wonder , the thought coming into mind might be this ‘ just how could something so small and humble have housed such a happy people?’.

I had enough funds to put in a modest bid , however just before the sale went through I was told our landlord wanted to sell the house we were living in so after agonising over what to do, I had to pull out of the purchase. Ever since the picture of that old cottage has been with me, and as it stayed with me an idea grew.

All the proceeds from the sale of this momento edition will be allocated exclusively to the ‘ Save a Quiet Man Cottage Project’. So when you buy one you know you have helped towards saving one of the last of the species. If it should come to pass that we can purchse the site I will immediately start to rescue it  and keep you updated as to progess .

So God Bless and thanks for considering buying one of my ‘Humble wee Cottage Models’.